HARTIG DRUG WRAPS UP ANOTHER FESTIVE ROCK ‘n Roll REWIND for the benefit of Albrecht Acres, a summer camp for people with special needs.

Call it a “throwback party.”  For the third year in a row, Hartig Drug and The Dubuque Rock Veterans were able to hand a check for $10,200 to Camp Albrecht Acres.  In a presentation today to the Executive Committee, Dick Hartig, CEO of Hartig summed it up, “As a team, “Rewind” is, at its minimum, an act of passion.” Passionate volunteer musicians gathering annually for fun and for the tremendous impact they can have on the lives of The Albrecht Acres campers.

Greg Pekas, organizer and musician, warned, “Wait ‘til next year.  Our event will be bigger and better and a weekend you won’t want to miss. Pencil in August 2 and 3, 2013…and we’ll see you at The Diamond Jo.”

Held August 10 and 11 at Courtside, the “Rewind” event featured two dozen bands from the ‘60’s,‘70’s, and ‘80’s whose musicians came from all over the United States to reunite with their former band members.

“Every musician is a volunteer,” said Hartig. “I can’t even begin to thank them for their gifts to Albrecht Acres. There is a sense among The Dubuque Rock Veterans and their many fans, families, and friends that we started out as a rag-tag bunch of Facebookers, and now we realize that Albrecht Acres not only appreciates what we’re doing, they’re counting on us to keep having fun while rockin’ for the camp.

“Hartig Drug is proud to continue our tradition in partnership with such an elite group of musicians who light up the audience with their music and wit…all in the spirit of making a difference for the campers at Albrecht Acres,” said Hartig CEO Dick Hartig.

For more information about Camp Albrecht Acres, Hartig Drug, or the Dubuque Rock Veterans, join us on Facebook. 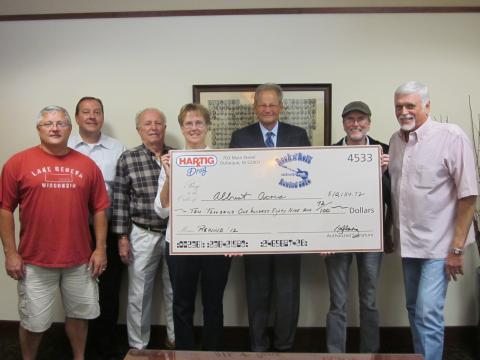